It’s not just a phase (separation)

Phase separation is the process by which one homogenous mixture separates into two distinct phases. Imagine trying to shake a bottle of oil and water. The two solutions mix initially, but then separate into little spheres, eventually coalescing into two separate phases: one made up of oil and the other of water.

This sounds obvious, but how it occurs in cells, its regulation, and methods used to investigate this phenomenon are infinitely more complex. Not surprisingly, phase separation is a key regulatory mechanism in biology. Membraneless organelles such as P bodies, nucleolus, and germ granules are commonly formed through liquid-liquid phase separation, a type of protein phase separation. This further compartmentalizes the cytoplasm alongside lipid-bilayer organelles like the mitochondria and nucleus. Typically, macromolecules must exceed their solubility limit to permit liquid-liquid phase separation (PS). Macromolecules then condense into droplets and distinctly separate from the dilute surrounding phase.

Since the discovery of the nucleolus in the 1830s, we have learned that liquid-liquid PS contributes to the formation of many intracellular compartments. Phase separation may also contribute to the formation of subcellular structures, such as heterochromatin, as well as membrane receptor clustering. The key functional aspect of these phase separations are the compartmentalization of cellular structures without the need for lipid bilayers.

Through proteomic and genetic screens, several crucial properties have been identified in the formation of these phase-separated particles. Multivalency and linear motifs are often found in proteins undergoing phase separation. This multivalency allows for “well defined interaction surfaces… which can participate in stereospecific interactions”. Intrinsically disordered regions of proteins may permit association by interacting in a variety of ways to drive phase transitions. Research suggests they work primarily through “sticky” interactions facilitating assembly due to “the exchange of macromolecule-water interactions for macromolecule/macromolecule and water/water interactions under conditions for which this process is energetically favorable”. 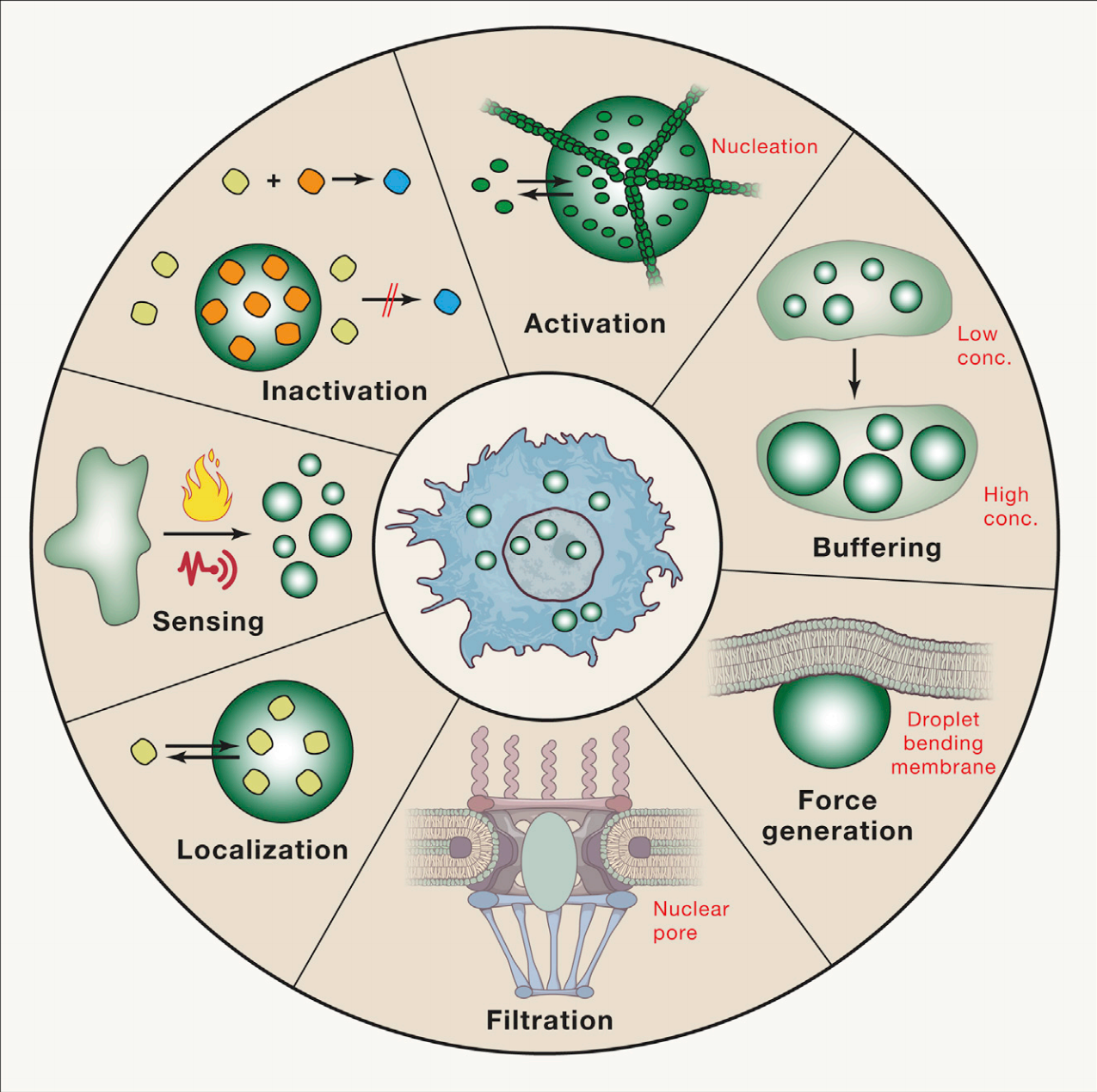 Interestingly, membraneless organelles can be liquids, solids, or gels. These properties are dictated by spatial ordering, which is determined by the organelle length and macromolecule organization. Liquid phase separated droplets display typical behaviors of liquids – fusion, dripping, etc. – and all properties are determined by the separated material’s surface tension. Unlike their more dense hydrogel counterparts,  liquid phase separation is often reversible. The formation of solid phase separated states is thought to be due to protein sequences; however, even gel and solid phase separated biomolecular condensates have displayed dynamic behavior. The dynamics of liquid-liquid phase separation are thought to play a key role in the condensates’ function, whether it be segregation, assembly, activation, inactivation, or localization. One Biochemistry, Molecular, Cellular, and Developmental Biology graduate student at UC Davis studying phase separation described the moment when they “unexpectedly observed the dynamic liquid droplets forming from the cells”, and it completely blew their mind. After studying cells using static methods such as fixation, staining, and immunofluorescence, they were surprised to find these dynamically forming lipid droplets while live imaging.

While phase separation has been shown to be an integral part of cellular processes and illustrates the complexity and beauty of biology, some scientists still question its legitimacy. Whenever a new process is shown to have phase separation properties, it is important to consider the possibility that protein overexpression can induce aggregation, imaging confounds, and other artifacts that resemble phase separation characteristics but do not represent endogenous properties. I think the BMCDB student sums it up best:

“The notion that liquid-liquid phase separation may be a general mechanism by which cells use to concentrate specific molecules and to facilitate the formation of membraneless organelles is compelling. However, the evidence for phase separation in vivo, especially in its endogenous abundance and physiological condition, is scarce. In addition, instead of comprehensive quantitative measurements, most studies to date have used qualitative evidence (i.e. roundness, fusion and splitting events of droplets) to demonstrate phase separation. Furthermore, the functional consequences of phase separation in vivo remain to be determined, given that perturbing phase separation property specifically without affecting other functions of the protein is still challenging to do. Therefore, better assays and more advanced techniques are needed to advance the field and to reveal true biological insights of phase separation in vivo.”