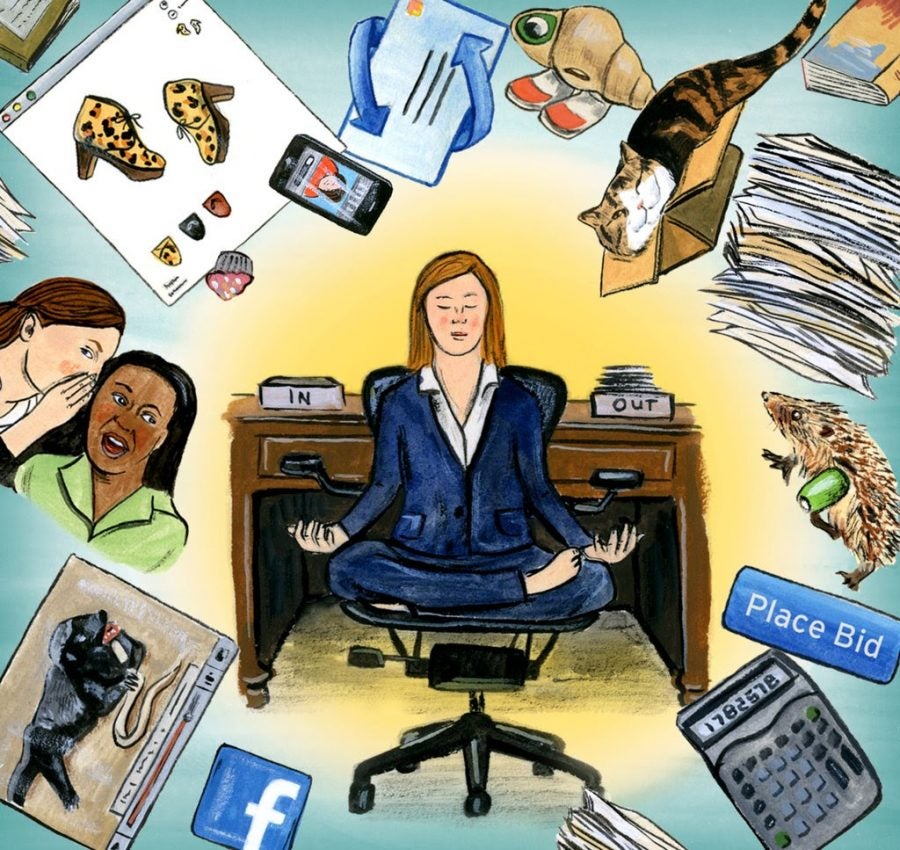 At any given moment, there are multiple, maybe even dozens, of things that demand our attention as graduate students. It could be the unread emails that need to be responded to, the experiment that needs to be planned, the papers sitting at home that need to be graded, the grant that needs to be written, and the list goes on. Whether it is an effect of our world moving faster, or a consequence of ourselves growing older, it is becoming increasingly more difficult to focus on a single task and ignore incessant distractions.

According to the 2018 Workplace Distraction Report published by the online learning company Udemy, Millennials and Gen Z were found to be the most distracted generations; 74% of surveyed individuals described themselves as distracted at work. Millennials and Gen Z are distracted at school as well as work: a cohort of university students were found to focus on a single task for only 6 minutes before succumbing to a distraction (Rosen et al., 2013).

While this might not come as a surprise, our brains do not do their best work when we are distracted. Business professor Sophie Leroy coined the term attention residue, defined as the attention that remains with an initial task even when an individual has transitioned to a second task. In experiments that involved giving participants a cognitively demanding task to complete, such as solving a complex puzzle, it was found that for those participants that were briefly distracted, even by just glancing up at a picture, their performance dropped significantly when returning to the original task. Just by changing their context very briefly, the attention residue seized by the distraction prevented individuals from performing at their best, and not just momentarily. It took some time before the attention residue fully cleared and individuals were again fully focused on the task at hand. Dr. Leroy’s work echoes the findings from a University of California, Irvine study where researchers shadowed individuals while at work and found that it took an average of 23 minutes for those individuals to get back to an initial task after being abruptly interrupted by either a telephone call or text message.

Cal Newport, professor and author of the cult book “Deep Work: Rules for Focused Success In a Distracted World,” makes the conclusion that by changing our cognitive context frequently at work, we are consistently building up attention residues that prevent us from ever truly focusing on a single task. That is, every time we take a quick glance at our inbox or attempt to multitask, we do so at the cost of performance. And while some can recognize this sacrifice of performance for distraction and address it with a casual “Well I guess I should be less distracted”, for those that rely on their brains to make a living (like graduate students), there should be more urgent concern.

So what are some ways we can set aside everyday distractions in favor of developing more productive work habits? Pete Leibman, creator of StrongerHabits.com and bestselling author, promotes three basic steps to minimize attention residue throughout the day. First, instead of jumping from task to task rapidly during the day, try to focus on a single project per day. Or, if that is not possible, dedicate the morning to work on one project, and then focus on a second project in the afternoon. This removes the largest cause of attention residue: multitasking between several unrelated projects. Second, because it can be overwhelming and demotivating to try to tackle a whole project in a single day, try breaking the project down into unambiguous pieces that can be completed in approximately 60 minutes. This practice will minimize the attention residue associated with working on related tasks at the same time, which is a sneaky form of multitasking. Third, plan to take short deliberate breaks throughout the day, especially when transitioning between tasks. Just like cleaning a paint brush before dipping into a new color, being intentional about taking short breaks in between tasks removes much of the attention residue that is stuck on the previous task.

Some other practical tips offered up by professionals in the business of decreasing distractions: for one day, write down everything you do, any task, both major and minor (from checking Facebook to giving lab meeting). For each item you listed, ask yourself if that task is a distraction: something that kept you from focusing on the most important tasks in your day. If it is, intentionally plan your day so that you are only doing those distraction tasks during a defined block of time so they do not interfere with your more important tasks. Also, to prevent being caught wondering what task you should be focused on, plan your day the afternoon before (not waiting until the end of the day when you are less likely to do it). And one final tip, which may be the simplest but the most difficult: while at work, keep your phone silenced and tucked away where it cannot be seen or reached, eliminating the temptation to indulge in easy distractions.

Related media to check out: this TedTalk for more on strategies to manage addictive distractions, and this NPR podcast with Cal Newport on deep work.

Sources (in order of appearance):

Leroy, Sophie. “Why is it so hard to do my work? The challenge of attention residue when switching between work tasks.” Organizational Behavior and Human Decision Processes 109.2 (2009): 168-181.