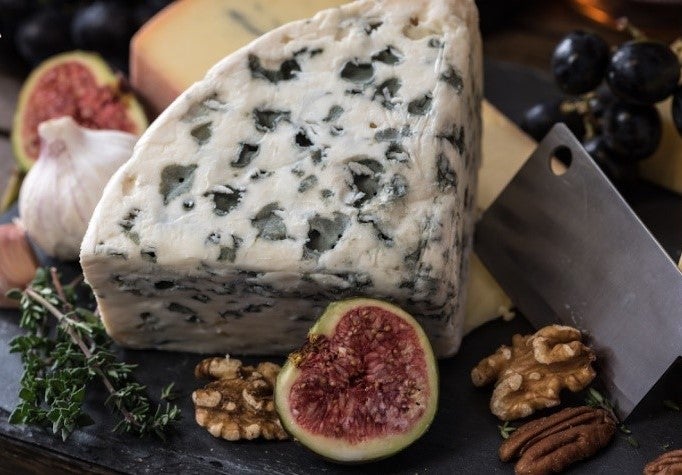 Say Cheese! A Snapshot of Microbial Communities on Cheese

I love eating cheese. If you set a block of cheese in front of me, I will probably not stop eating. One of my favorite memories from taking French in high school, besides singing a bunch of Disney songs in French, was the time my teacher brought a few different cheeses for us to try out. I have briefly thought about getting a cheese wedding cake if I ever manage to get married.

But what makes cheese so cheesy? The answer is, surprisingly, microbes.

How is cheese made?

Before we delve into the contribution of the microbial community within cheese, it’s important to know a bit about how cheese is made. The key component in milk for making cheese is the protein casein. Normally, casein is found in a micelle form in milk, which means that several caseins aggregate together into a spherical form. Since casein is negatively charged, the spherical micelles repulse one another. However, if acid is added, the negative charge is neutralized, allowing for coagulation, which is the thickening of milk into solid curds that are used to make cheese. Using this method alone will produce softer cheeses.

Another way to promote coagulation is to use rennin, which contains a protease called chymosin that breaks down κ-casein, a soluble protein that forms a protective and stabilizing layer around casein micelles. This formation of the solid milk curds is the first step in making cheese. The curds are then separated from the whey, which is a liquid byproduct composed of proteins that remain soluble even after acidification and rennet treatment. Whey can be used for several things, such as protein shakes. Meanwhile, the curds are processed in various ways to make different types of cheeses. The last step is the maturation of cheese, which contributes most to the distinct flavor of cheese and can last anywhere from several months to several years.

So where do microbes come into the picture?

While vinegar or lemon juice can be used to acidify milk, another common method is to use microbial starter cultures instead. Some of the most commonly used strains in starter cultures include Lactococcus lactis (used for cheddar), Streptococcus thermophilus (used for mozzarella), and the Lactobacillus species (used for Swiss cheese). These bacteria help acidify milk by converting lactate into lactic acid.

Microbes also play a significant role during the aging process of the cheese. During this time, bacteria added from the starter cultures begin to die off, while other microbes that were either already in the milk from the beginning or joined in from the environment along the way begin to flourish.

Sometimes additional microbes known as adjunct cultures are added. Their main purpose is to enhance the flavor or texture of the cheese rather than to produce lactic acid. One example is the mold Penicillium roqueforti, which puts the blue in blue cheese through its formation of spores. The unique flavor of blue cheese comes from the conversion of fats into flavorful free fatty acids and methyl ketones by lipases produced by P. roqueforti. Another example is Penicillium camemberti, which gives cheeses like camembert and brie their soft, gooey texture. Its preference for the surface of the cheese allows for the development of a characteristic soft, white, bloomy rind. The holey appearance of Swiss chese is thanks to Propionibacterium freudenreichii. These bacteria convert lactic acid inside the cheese into carbon dioxide, which becomes trapped and forms bubbles. Acetate and propionic acid are also produced as byproducts and contribute to the flavor of the cheese. P. freudenreichii is often used together with Lactobacillus helveticus, a strain that can also be used when making cheeses like cheddar and that helps produce a nutty flavor.

Of course, there are many other microbes present in cheeses. In addition to those that are added, there are also microbes that were present from the very beginning in the milk, as well as ones that were acquired throughout the cheese-making process. Furthermore, many factors such as pH, temperature, and salt content affect which microbes are capable of forming colonies in the cheese. The presence of the microbial community, the metabolic byproducts they produce, and their interactions with one another in turn produce the distinctive flavor, aroma, and texture of many different cheeses.

Cheese is home to many different microbes, and the rind is especially rich in microbial diversity. This makes cheese a potential model system for studying microbial communities. One of the labs that uses cheese for research is headed by Rachel Dutton at UC San Diego. Back in 2014, her lab successfully sequenced 136 different rind communities and found that they are highly reproducible. They discovered that the composition of the microbial community on cheese rinds and the relative abundance of individual microbes is correlated with the type of rind. For example, the bloomy rinds of camembert have a denser population of fungi, as would be expected of rinds produced due to the mold P. camemberti. The environment that the cheese is exposed to as it ripens is important too, but surprisingly, where the cheese was made does not correlate with the composition of the microbial community.

The Dutton group also found that many of the dominant species can be isolated and cultured, allowing them to easily recreate the communities in vitro. Thus, they were able to study interactions between different species, and observe how they affect one another in pairs. One of their findings is that the presence of fungi may promote an increase in pH, creating an environment that is beneficial to some bacteria. Overall, it looks like they’ve succeeded in creating quite the tasteful system.

Cheesy pun aside, cheese really is quite wonderful. It’s the basis of many delicious dishes and makes for a great snack by itself. On top of all that, it’s also making cool contributions to science. You gouda love it.

(P.S. Cheese can still go bad. If you see mold that isn’t supposed to be on the cheese, throw it out if it’s a soft cheese. For hard cheeses, which have lower moisture content, you should be able to cut off the moldy part and keep the rest. Bon appetit!)

Not so devious intentions